The site at Jeongneung contains the tomb of King Taejo's second wife, Queen Sindeok (?-1396). King Taejo (1335-1398) is the man responsible for dismantling the Goryeo Dynasty and founding the Joseon Dynasty in its stead. Taking advantage of a military confrontation with China's emerging Ming Dynasty over the Liaodong Peninsula, Taejo - serving as the general Yi Seonggye at the time - turned on the capital and initiated a coup d'état. King U was replaced by his son, King Chang, before both were killed by Taejo. Another member of the Goryeo royal family, King Gongyang, was then put on the throne before the dynasty was abolished altogether.

Adopting a custom from the Goryeo Dynasty, King Taejo had two wives -- one from his hometown in Jeonju (Queen Sinui), and one from the nation's capital, Seoul (Queen Sindeok). Queen Sinui died a year before Taejong took the throne but had six sons and two daughters during the time the two were married. A further policy from the Goryeo Dynasty was to have a son from the first queen named Crown Prince to take over the throne, but between his love for Queen Sindeok and some persuasion from Prime Minister Jeong Dojeon he had Queen Sindeok's second son named as Crown Prince.

When Queen Sindeok died in 1398 King Taejo built her tomb close to the city's fortress, currently located within central Seoul's Jeong-dong, and had Heungcheonsa Temple constructed nearby as a place to pray and spend time while visiting his wife's grave. While the king was in mourning his prime minister, Jeong Dojeon, plotted to kill the sons of Queen Sinui to smooth the transition to the rule of Queen Sindeok's second son and cement his own position within the court. Queen Sinui's fifth son, Yi Bang-won, heard the news and raided the palace -- killing Jeong Dojeon and both of Queen Sindeok's sons in an event known as the Rebellion of Princes (왕자의 난). 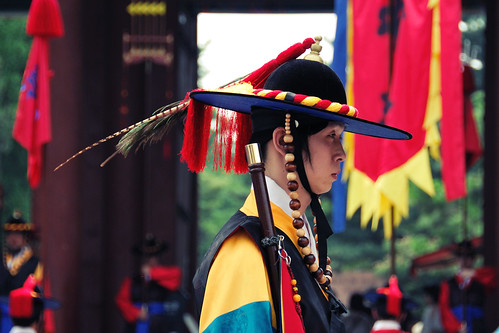 It's reported that King Taejo, upset over the fratricide and saddened by the loss of his second wife, retired from the court after naming Queen Sinsui's second son, Yi Bang-gwa, as his replacement. Yi Bang-gwa assumed the throne under the name King Jeongjang but had ruled for less than a year before his brother Yi Bang-won (the same brother who had killed Queen Sindeok's sons) attacked a contingent of the royal forces and later coerced the king to name him Crown Prince. Giving in to his younger brother's rising aspirations, Jeongjang eventually abdicated and Yi Bang-won ruled from 1400-1418 as King Taejong. There's obviously much more history involved after King Taejong's rise to the throne - he later had his older brother exiled, for example - but I'll leave that for now to concentrate on what happened to Queen Sindeok's tomb during his time as king.

As mentioned above, Jeongneung was originally located in the Jeong-dong district of central Seoul (the district takes its name from the queen's tomb) and the Cultural Heritage Administration page for the site mentions that the British Embassy has been built on what used to be the queen's grave. So what happened?

After assuming the throne, King Taejong (formerly Yi Bang-won) "permitted the building of a residential town up to 100 steps from the tomb area" (CHA) that also allowed influential families to clear forested areas surrounding the site. Later, when Gwangtonggyo, one of the bridges traversing Cheonggyecheon stream in Seoul, collapsed during a flood, Taejong authorized the removal of the tomb's byeongpungseok (a stone wall at the rear of the tumulus) to rebuild the bridge. After his father's death in 1408 King Taejong had the whole thing removed from the capital and sent to the countryside of Yangju -- the tomb has remained in the same location ever since, though the part of Yangju containing the queens' tomb was later broken off and reincorporated into Seoul. (The city of Uijeongbu was also created from land that was formerly administered by Yangju.)

In addition to moving Queen Sindeok's tomb outside the capital King Taejong also had her demoted to 'court concubine' and her name was stricken from the royal register at Jongmyo. To coincide with this, Taejong's mother, Queen Sinui, was named the sole wife of King Taejo. Continuing with a passage from Visits to the Kings: A Journey Back to the 500-Year History of the Joseon Dynasty:

Her reinstatement came slowly. Two hundred years after her death, the abandoned tomb was discovered during the rule of King Seonjo and after 60 years (in 1669), 10 years after King Hyeonjong ascended the throne, her tomb was registered in Jongmyo and Jeongneung as we know it today was established. On the day Queen Sindeok was registered in Jongmyo, it poured. People called it "the rain that washed away her resentment" [ 洗寃之雨; Seowonjiu ] and consoled her soul.

The stone guardians surrounding the tumulus are fewer in number and less ornate than those at other Joseon tombs, but I am happy to see them there.

Take the subway (Line 4) to Sungshin Women's University Station (성신여대역; Station 418) and go out using Exit 6. There won't be any signs indicating the way to go for a while, but keep walking past the Korean movie poster poles and Arirang Cine Center as the road goes up and then down a hill. Once you hit the downhill slope you should see a couple of signs pointing out the way to go from there.