In my previous entry I wrote about the Joseon dynasty royal tombs located at Uireung and mentioned my desire to include information about the life of King Gyeongjong and his second lawful wife, Queen Seonhui. The main reason that kept me from doing this at the time is that so much of what happened during Gyeongjong's rule is the result of fighting between political factions -- with one of the groups involved splitting into two new factions during the same period. 아이고.

To start with, King Gyeongjong (1688-1724; r. 1720-1724) is the oldest son of King Sukjong, born during the fourteenth year of his father's reign. Sukjong's first wife was Queen Ingyeong (1661–1680) of the Kim clan. The two were married while Sukjong was still Crown Prince and she became queen in 1674 when Sukjong assumed the throne. Ingyeong had three daughters but all died during childbirth; when she was 20 years old Ingyeong showed signs of pox and died within eight days.

Following a year of mourning Sukjong married his second wife, Queen Inhyeon (인현왕후) of the Yeoheung Min clan, but she was unable to provide an heir for the throne. One of the king's consorts, Jang Okjeong, gave birth to a son in 1688 and as a result she was promoted to the position of Huibin ('Grand Concubine' and 'Royal Noble Consort' are the two English translations I've come across for this title). King Sukjong was so relieved to have an heir that he had the boy - Gyeongjong - named First Prince at two months old before later having him recognized as Crown Prince when he turned two years old.

However, Queen Inhyeon was still young (21 years old) at the time of Gyeongjong's birth and some members of the court felt that Jang Okjeong's promotion was unnecessary. This resulted in an ideological clash over power between members of the 'Southerners' (남인) and 'Westerners' (서인) that lasted until the Southerners lost power in 1694. Despite gaining power from the Southerners, a series of differences within the Westerner faction eventually led to the creation of two new political factions - the Noron (Old Learning) and Soron (New Learning) groups - at the start of the 18th century.

Further complicating matters, Queen Inhyeon's father was associated with the Noron faction while consort Jang's older brother was a member of the Soron, which should give some indication as to how interested each lobbying group was in determining the choice of royal heir. Song Si-yeol, the court's secondary state minister and leader of the Noron faction, was particularly vociferous in his objections and was eventually banished to Jeju Island by King Sukjong. Queen Inhyeon refused to adopt Gyeongjong as her own son - a common procedure at the time - and was demoted from her position due to the political machinations of the time. This dispute led to not only the queen's removal but also a purge - by banishment and poisoning - of government officials (Westerners) that is known as Gisa Sahwa (기사 사화). Consort Jang Okjeong was promoted to a position as Queen / Grand Concubine Oksan (옥산 대빈) as a result of these changes and the Southerners regained power in the court.

From Homer B. Hulbert's History of Korea, Volume 1 (1905:157) comes the following statement from King Sukjong:

For a long time I have been aware of the queen's jealous disposition and evil mind, and I have borne with it patiently but now I can endure it no longer. Since I have taken the concubine Chang [Jang under the old Romanization system] it has been still more unendurable. The queen and the concubine Kim have been putting their heads together in an attempt to frighten me into putting away Chang, but I saw through the plan. Now what shall we do?"

As time passed King Sukjong grew to regret his decision and Queen Inhyeon was reinstated to her position in 1694 while Grand Concubine Oksan Jang was returned to her previous station as huibin in an event known as Gapsul Hwanguk (갑살 환국). Inhyeon was first moved to a small palace in Andong and then to the "Mulberry Palace" before finally returning to the main palace itself. Following Gapsul Hwanguk "a stringent law was made that henceforth no royal concubine should ever be raised to the position of queen" (Hulbert 1905:160). And then everything returned back to normal, right?

An entrance to the queen's quarters, Changdeokgung Palace (창덕궁)

The Noron and Soron factions continued fighting for influence in the court; the Noron faction tried to persuade the king to kill Concubine Jang, while one of the concubine's servants stole a name tag (used for identification purposes during the Joseon dynasty) from the Noron leader's slave and buried it next to Jang's father's grave to suggest that witchcraft - using a fetish - had been involved in the Noron's rise to prominence. After some investigating, the king discovered the ruse and had several court advisers killed or banished.

In 1701 Queen Inhyeon grew ill and passed away soon after. Hulbert mentions boils in his account, but other sources only state that she died suddenly. To continue with another excerpt from History of Korea, Volume 1 (1905:160):

Four years passed without any events of importance, and then the queen became afflicted with boils and expired. The records tell us that that night the king dreamed that the dead queen came to him with her garments covered in blood. To his enquiries (sic) she made no answer except to point toward the apartments of the concubine Chang. The king arose and went in that direction, and his ears were greeted with the sound of laughter and merriment. Wetting his finger in his mouth he applied it to the paper window and soon made a peep-hole. There he beheld the concubine and a large company of sorceresses engaged in shooting arrows into an effigy of the queen and making merry over having done her to death by placing a fetich (sic) under her room
[...]
In spite of her being the mother of the Crown Prince, he poisoned her and killed all her sorceress companions. A host of the Nam-in party (Southerners) also met their death. The almost incredible number of 1,700 people are said to have met their death as a result of this disturbance. 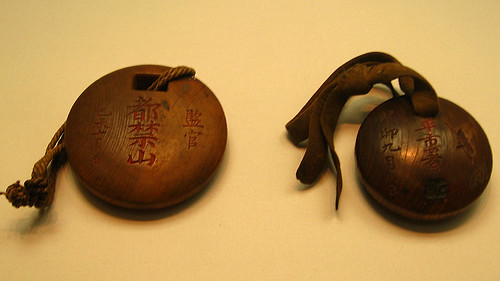 Hulbert later adds (1905:162) that Concubine Jang told her son, the future King Gyeongjong, that if she was going to die he should die with her. He is reluctant to follow her demand and "she struck at him with an improvised weapon, a piece of wood. She succeeded only in wounding him, but it was in a portion of the body that rendered it impossible for him ever to have an heir." This incident is also brought up in the Cultural Heritage Administration book Visits to the Kings: A Journey Back to the 500-Year History of the Joseon Dynasty (2008:90), and in slightly more detail at that. (Presumably due to the 100 year gap between Hulbert's work and this more recent offering.)

When Royal Noble Consort Huibin from the Jang clan was killed, she pulled her son's penis, which made King Gyeongjong faint on the spot. This is said to have made him ill and eventually impotent. King Gyeongjong indeed suffered from ailments for 19 years after his mother died, thereby ascending to the throne only to die four years later without producing a single child.

King Gyeongjong assumed the throne in 1720 but only ruled for four years before coming to an untimely death. During this time the Noron faction pressured him to step down in favor of his half-brother Prince Yeoning, who would eventually rule under the name King Yeongjo. After Queen Inhyeon's death King Sukjong married a third time and his wife, Queen Inwon (1687-1757) adopted Gyeongjong and Yeoning, who was born by another concubine in the palace. The Norons sent memorials to the king to no effect while the Sorons used this to their advantage -- claiming the Noron faction were trying to usurp power and subsequently getting their rival faction removed from several offices. Members of the Soron faction then came up with an idea to assassinate the heir (Gyeongjong) under the cover of hunting for a white fox said to be haunting the palace (1905:163).

Despite these plans, Gyeongjong came to place great trust in the Soron party. Hulbert writes:

First, the king was so enamored of the Soron party that he took Mok Ho-ryong, their leader, outside the gate one night and sacrificed a white horse and, tasting its blood, swore that until time's end Mok Ho-ryong's descendants should hold high office under the government. Second, the Soron officials went to the shrine of the great Song Si-ryul (Also written as Song Si-yeol, remember him?) and tearing the tablet from its place, dragged it through the filth of a dung hill.

No love lost between the Noron and Soron factions, it seems.

Wrapping things up, King Gyeongjong was a somewhat ineffectual ruler before dying just four years into his reign. There was some speculation that his half-brother Yeoning had something to do with his sudden death due to the earlier attempt by the Noron faction to have him replace Gyeongjong on the throne. However, Hulbert has such an amusingly succinct description of the event (1905:164) that I want to quote him one last time:

But we may well doubt the truth of the rumor, for nothing that is told of that brother indicates that he would commit such an act, and in the second place a man who will eat shrimps in mid-summer, that have been brought thirty miles from the sea without ice might expect to die.

Following King Gyeongjong's death his half-brother assumed the throne under the royal title King Yeongjo. While it must be said that Yeongjo removed the factional division that had plagued the court during the rule of his predecessors, he also forced his son to commit suicide. But that's a story for another time ...