A meeting in Prague by the International Astronomical Union (IAU) near the end of last week demoted Pluto so that, rather than being the solar system's ninth planet, it is now considered a dwarf planet. The debate arose due a recent string of findings that have yielded at least three celestial bodies (Quaoar, Sedna and 2003 UB313 "Xena") that could qualify as planets under the old system of classification - and as the last of the group is larger than Pluto it was a matter of either including the new bodies as planets or redesigning the definition to exclude the new discoveries and Pluto. 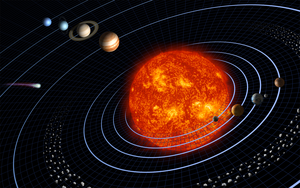 I've seen a number of people in various journals and communities bemoan the loss of Pluto as a "true" planet, but while they're pitying the poor fortune of our former ninth planet they are also ignoring Pluto's binary (twin) planet, Charon. After all, Pluto doesn't even have its own center of gravity; Pluto and Charon actually orbit around one another (animation) and Charon would have been considered a planet in its own right under a draft proposal of the IAU. It may sound odd to have two planets orbiting around one another, but then again the pair also has an orbit which is highly inclined (up to 17° above the ecliptic rather than on a flat plane) and very eccentric (non-circular). Is there anything normal about Pluto-Charon?

Two other designations were introduced at the IAU meeting: Small Solar System Bodies (SSSBs) and plutons. The latter includes objects with highly inclined orbits, large eccentricities, and an orbital period of more than 200 years (i.e., past Neptune). Pluto is a prime example of this new category, although in a strange linguistic twist pluton is actually the name of Pluto in some languages (notably French and Spanish) - which might make teaching introductory astronomy an interesting proposition in Western Europe over the next couple of years. And in other languages? Pluto is known as 冥王星 in Chinese, Japanese, and Korean, which translates to Star of the King of the Dead; while in Vietnam it is named after Yama, the Guardian of Hell in Hindu traditions. Interestingly, Yama's name can be interpreted to mean "twin" - which in the astronomical sense can be used as a reference to Pluto's twin body, Charon.

And to switch to another Hindu deity, today marks the beginning of Ganesh Chaturthi (or Vinayaka Chaturthi in the southern states). On this day, students place books in front of the Ganesha idol and offer worship. They pray to the deity to illuminate their minds. Hence, Ganesha is known as 'Buddhi Pradaayaka', or 'One who grants intelligence'.* Obviously there's much more to the occasion than just that, but it seems rather appropriate now given how tomorrow starts the second week of our current semester.